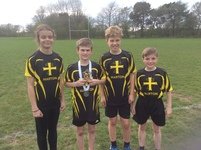 Wednesday saw the final cross country race for some of our Year 6 runners and the afternoon did not disappoint. The conditions were just right for the runners; the sun was out, there was a chilly breeze in the air and the fields were firm with some boggy patches.

The girl’s race started at a great pace and the field was strong. Team Marton ran a fantastic race and were well positioned from the off. Ellie (Year 5) battled throughout the race and was just beaten into fourth position, despite a very good sprint in the finishing straight. Mia (Year 6) was not far behind, even though she was advised against running by the “Marton Medical Team”! Maddie and Casey (both Year 5) completed the line-up for Team Marton and ran exceptionally.

Then the Boy’s race, again the race started at a blistering speed. The favourite, Hayden (Year 6) appeared to struggle with the initial pace and was sat in 2nd place at the half way stage. However, the training kicked in and the afterburners were lit, not only did Hayden take the lead and keep the lead, but he also caught up the hare who was setting the pace. Michael (Year 6) followed not far behind and then the rest of the team of Finley (Year 6), Billy and Rhys (Year 5) all finished strongly.

This was an amazing end to the cross-country season. Thank you to all runners who have run throughout the course of the year. Special achievement medals will be awarded to Michael, Finley and Mia (all Year 6) tomorrow at our celebration assembly. These are awarded for their continued commitment and always competing at Cross country with a huge smile on their faces.

Though it is the smallest of all seeds, yet when it grows, it is the largest of garden plants and becomes a tree, so that the birds come and perch in its branches. Matthew 13:32

We use necessary cookies to make our site work. We'd also like to set optional analytics cookies to help us improve it. We won't set optional cookies unless you enable them. Using this tool will set a cookie on your device to remember your preferences.

Necessary cookies enable core functionality such as security, network management, and accessibility. You may disable these by changing your browser settings, but this may affect how the website functions.